This is a great article by Roy Avik from Forbes, outlining how the Trump Administration is trying to help with Medicare Part D drug costs 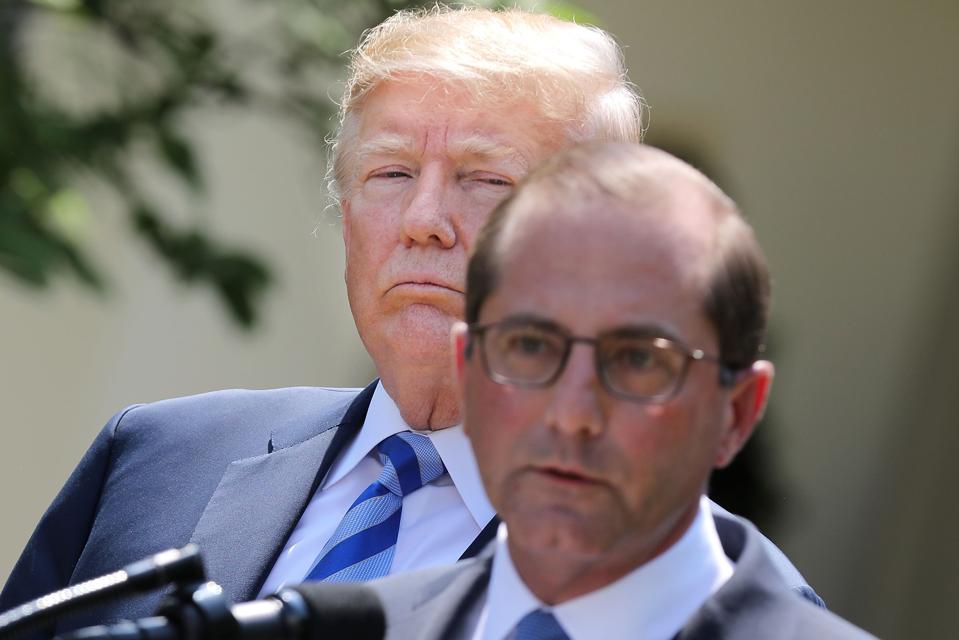 WASHINGTON, DC – MAY 11: U.S. President Donald Trump listens to Health and Human Services Secretary Alex Azar deliver remarks during an announcement about drug prices in the Rose Garden at the White House May 11, 2018 in Washington, DC. Trump announced a ‘blueprint’ for lowering the cost of perscription medications. (Photo by Chip Somodevilla/Getty Images)

On Friday, in the White House Rose Garden, President Trump announced a comprehensive new effort to lower drug prices. The hot take is that the new plan will achieve little, because it doesn’t ask Medicare to directly negotiate drug prices. But the hot take is badly misinformed. The Trump plan, if enacted, represents a sea change in pharmaceutical pricing policy, one that will have a significant effect on drug prices in the future.

As the Congressional Budget Office put it in a 2014 report, “The competitive structure of Part D gives plan sponsors significant incentive to hold down spending…sponsors use three main approaches: They encourage the use of less-expensive brand-name drugs, they negotiate lower prices for brand-name drugs, and they encourage the use of generic drugs.” (Emphasis added.)

This negotiating process is why Part D spending has come in massively under budget, representing the most successful cost-control experiment in Medicare’s history. 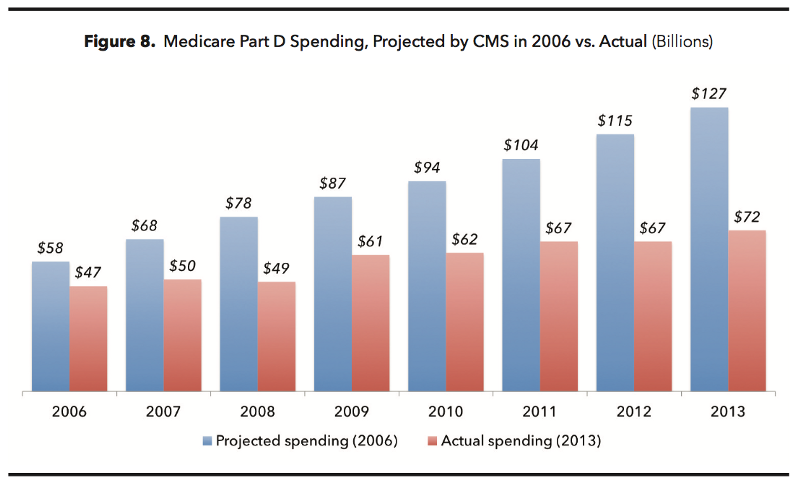 Medicare Part D spending has come in massively under budget.

When Medicare Part D was enacted in 2003, people on the left complained that it administered the program through private insurers and PBMs. They wanted Part D to be a government-run, single-payer program, and have long agitated for Part D to be changed in this way. That’s what people mean when they talk about Medicare directly negotiating drug prices. But the Congressional Budget Office has repeatedly evaluated this idea, and concluded that the effect would be “limited” and “modest,” because Part D plans already negotiate on Medicare’s behalf.

The Trump plan involves two categories of reform: things the administration can do unilaterally, and things that it will call on Congress to enact. Friday’s release focused mainly on unilateral actions, but the Congressional piece is arguably more important, and has gone underappreciated by many observers. As the President put it, “These [unilateral] reforms are just the beginning. In the coming weeks, we will work with Congress to pass legislation that will save Americans even more money at the pharmacy. For that, we need the help of Congress, and we think it will be forthcoming.”

In particular, the Trump administration has proposed limiting the growth of Medicare payments for drugs administered in the doctors’ office—under Medicare Part B—to consumer inflation (CPI). This simple change could save taxpayers tens of billions of dollars over time, and curb the ability of drug companies to exploit the system by instituting double-digit price increases every year for old drugs.

Similarly, the administration is proposing shifting some, if not all, drugs out of Part B into Part D, in order to increase the number of drugs that fall under Part D’s negotiating process. And the administration is considering rolling back mandates that force Medicare to keep costly drugs on its formularies, regardless of their value.

Ideally, the Trump administration will also persuade Congress to revisit two laws that have driven up the cost of prescription drugs: the Orphan Drug Act of 1983, which allows companies with no intellectual property to charge exorbitant prices for drugs meant to treat rare diseases; and the Biologics Price, Competition, and Innovation Act of 2009, which has not done enough to encourage competition for off-patent biotech drugs.

What the Trump administration will do on its own

On Friday, the administration released a 44-page blueprint for executive action on drug pricing entitled “American Patients First.” The blueprint represents the most comprehensive, serious, and thorough effort by any presidential administration to address the problem of high prescription drug prices.

That doesn’t mean it’s perfect. There are plenty of areas where the blueprint can improve. But it considers many good ideas for addressing the problem of high prices, including:

Where the Trump administration has the wrong idea

The HHS blueprint justly recognizes the key factor in bringing drug prices down: increasing competition. But it gets distracted with other, more political goals that won’t do anything to make medicines more affordable to taxpayers.

The blueprint complains a lot about “high list prices for drugs”; that is to say, the “sticker price” that drug companies charge. But the sticker price isn’t what matters. What matters is the actual price, net of rebates and wholesaler discounts, that Americans pay. Getting that net price down should have been a greater focus of HHS’ efforts.

Finally, the blueprint wastes several pages complaining about “foreign governments free-riding off of American investment in innovation.” This is a nationalist canard, perhaps meant to help drug companies feel better about the blueprint’s other, tougher measures. The problem is not that other countries underpay for branded drugs; the problem is that the U.S. overpays. Pharmaceutical manufacturers are free to not do business with any country that is paying an unattractive price. The drug companies accept those prices because they still make money at those rates.

Where Trump should do more: Tackling monopolies

As I mentioned above, the Trump administration is doing a lot of good things to open up competition in the drug sector. Competition is the one thing that has been reliably proven to reduce drug prices.

But there are lots of diseases—particularly rare ones–in which there is only one drug approved by the FDA for treatment. If that one drug is patented, its manufacturer often exploits that fact to charge prices that would never fly in a true market. It is in these situations where more aggressive action is needed.

Capping growth of Part B drug prices at consumer inflation is a good first step. Rolling back formulary mandates, so that Medicare isn’t forced to pay for low-value drugs, is a second one. Here are some other ideas:

President Trump and HHS Secretary Alex Azar promise that they’re only just getting started. The proof will be in the pudding.